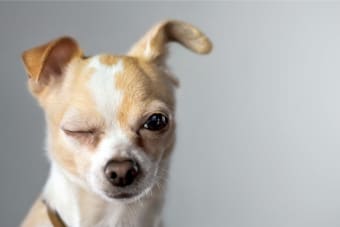 Entropion is a condition seen in many breeds where the dog's eyelids roll inwards, causing irritation, pain, and other secondary eye problems. Today our St. Francis Veterinary Hospital vets share more about this common eye condition in dogs including symptoms and how entropion is treated.

Entropion is primarily a genetic abnormality that causes the dog's eyelids to roll inward. This inward positioning means that your dog's fur and eyelashes rub against the surface of the eye often causing pain, conjunctivitis, eye infections, corneal ulcers, perforations, and in some cases the development of pigment on the cornea which interferes with your dog's vision.

Signs That Your Dog May Have Entropion

Signs of entropion typically appear early with most dogs being diagnosed before they reach their first birthday. Squinting, excessive tearing and holding eyes shut are the most common signs of entropion. Although in some cases flat-faced dogs will show no outward signs of discomfort.

Treatment for Entropion in Dogs

Puppies will sometimes grow out of entropion and no treatment will be required. However, if the condition is causing discomfort a procedure known as 'tacking' or temporary eyelid eversion can help relieve symptoms in young dogs.

Medical treatments with antibiotic ointments can be prescribed to decrease damage to the cornea, but medications will not resolve the entropion itself. To correct the issue surgery will be required.

If entropion continues to be an issue as your dog reaches their first birthday surgery can be performed, to correct the issue and relieve your dog's discomfort.

To avoid over-correcting this condition (which could lead to an outward rolling of the eyelids), two surgeries may be performed, the first being the primary (major) correction and the second being a minor corrective surgery.

Before and after the surgery your dog may be prescribed medications such as ophthalmic antibiotics or lubricants to treat conditions resulting from the irritation caused by entropion.

The cost of entropion surgery for dogs varies depending on several factors but tends to range between $500 - $1800. To find out how much this surgery will cost to correct your dog's eye condition contact your St. Francis Veterinary Hospital vets for details.

The prognosis for Dogs with Entropion

Following surgery, most dogs recover well and the condition does not return. That said, recurrence is common in Shar Peis due to their excessive folds of skin around the eyes.

Note: The advice provided in this post is intended for informational purposes and does not constitute medical advice regarding pets. Please make an appointment with your vet for an accurate diagnosis of your pet's condition.

Is your dog showing signs of entropion? Contact our St. Francis Veterinary Hospital vets today to book an appointment.

When to Visit an Emergency Vet?

While some veterinary emergencies are easily recognized, other conditions requiring urgent veterinary care are often less obvious and harder to spot. Below, our Lafayette vets share some examples of situations that may require emergency vet care.

My cat won't drink water! What should I do?

Both pets and people need to stay hydrated. So what should you do if your cat won't drink water? Our Lafayette vets list some reasons why your cat may not be drinking and what to do.

We look forward to meeting your beloved pet at St. Francis Veterinary Hospital.